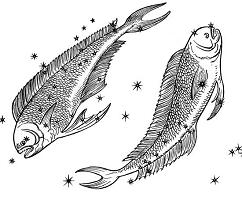 The Pisces individual is compassionate, empathetic, imaginative, sensitive, mystical, spiritual, dreamy, passive, easy-going, idealistic, visionary, inspirational, accepting, undiscriminating, charitable, believes in soul growth, self-sacrificing and artistic. They can also sometimes be distracted, detached, illusory, impractical, gullible, neglectful, escapist and lazy. Pisces is the mutable, water, masculine sign. Pisces is symbolized by the Fishes. The ruling planet of Pisces is Neptune , the planet of restrictions and. The water form of Pisces is the ocean. The keyphrase for Capricorn is: "I believe".

About The Pisces Personality

If you were born with the Sun in Pisces, you are compassionate and spiritual. There is a spiritual side to Pisces and they are often more concerned with intellectual or imaginative things then with the physical or material world. This sign is quite a dreamer and somewhat mystical in their nature. Sometimes Pisceans feel split between two worlds; the one they dream about and the one they actual live in. Sometimes you just feel uncomfortable in your earthly surroundings, often feeling like you don't belong.

As a Pisces you may be drawn to spiritual or occult matters. Pisces is also one of the most psychic individuals of the zodiac. Your strong intuition enables you to see into the depths of the human psyche, and often get hunches and flashes of insight that end up coming to pass. Your personality can be sometimes elusive and hard to define.

You are very influenced by your surroundings and other people. Pisceans are empathetic to the emotions of other people. You soak up the feelings of other people as if they were your own. This can be quite emotionally draining for a Pisces. You understand people very well. Your also very sensitive and sympathetic, almost to the point of being a little vulnerable. Too many things influence you and it's sometimes hard for you to say no to other people because of your compassionate nature. Sometimes

Sometimes the actions of a Pisces can be self-defeating, and often they are the creators of their own downfall. Since this sign is often impractical they can be prone to overindulgance. Sometimes you don't know what's best for you and can make many wrong decisions. Pisces has a tendency to become troubled by life and oftren suffer heartache and dissapoint. You desperately try to escape this sorrow but sometimes you suffer from conflicting emotions. You don't know which way to go. Pisces must learn to find stability, balance and a sense of purpose in life. 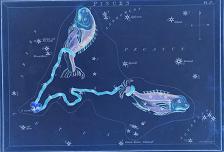 There is a negative side to Pisces that encourages negativity, laziness, carelessness, and emotional confusion. But you are also someone who is capable of hard work and sacrifice when it is for an important cause or ideal you have. Because Pisces is so imaginative and creative they do well in areas of art, music, and writing. You can also achieve much where intellect is concerned. The classic description of Pisces is one of the poet and the dreamer. You strive to create a world that matches the one you envision in your dreams.

Pisces is mysteries, magnetic, engaging, with a intriguing sense of drama, and an awareness of the world around them. You can be quite charming and delightful, especially when working with select groups of people, but Pisces often prefers to work alone. Sometimes many talented Pisceans never attain the succes they deserve. You sometimes choose to take the path of least resistance because you lack self confidence. A Pisces friend is very loyal and caring, sentimental, devoted, generous and always ready to help someone else. You appreciate the inner qualities of other people and are not usually a superficial person or someone who judges a book by it's cover.

Overal Pisces is sensitive and perceptive. Receptive to others, and willing to make a difference where it counts. They see the world as it really is, and not just the way it appears to be. You are a very warm-hearted individual, and are often plagued by feelings of sadness and inner sorrow because the world never matches the world of your heart. Many Astrologers consider Pisces to be old-souls on this earth.

Symbol and Glyph - The Symbolic representation for Pisces is the Virgin Maiden:

The Pisces glyph symbol is -

It is a representation of two fish tied together yet swimming in opposite directions.

Ruling PlanetRuling Planet- In Astrology, Pisces is ruled by the planet Neptune. Astrologically Neptune is associated with idealism and compassion, but also with illusion, confusion and deception; with religions, spirituality and mysticism, the mass media, creativity in art and music, drugs, extreme sensitivity, fantasy and imagination, psychic phenomena and altered mental states. Neptune governs hospitals, prisons, mental institutions, and any place, such as a monastery, that involves a retreat from society. The influence of Mercury over Virgo encourages illusion, mystery and deception. In Roman mythology Neptune is the god of the sea

*Some modern astrologers also consider Jupiter a co-ruler of Pisces.

Anatomy - In Medical Astrology Pisces represents the Feet, liver, and lymphatics. Pisceans may have beautifully shaped feet, or sensitive feet that are unfortunately prone to aches, bunions, and corns. Ill-fitting shoes are a particular hazard to people of this sign.

Duality - Pisces is considered a Feminine sign. The other feminine signs of the zodiac are Taurus, Cancer, Scorpio, Capricorn, and Pisces.

Element/Triplicity - Pisces is an Water sign. Water signs are emotional and intuitive. The other 2 water signs of the zodiac are Cancer and Scorpio.

Quality/Quadruplicity -Pisces is a Mutable sign. Mutable signs are flexible, versatile and adaptable. They are able to adjust to different circumstances very easily. The three other mutable signs are Gemini, Virgo and Sagittarius.

Color - Lighter Greens, Glue-Grey and Turquoise (The dreamy colors of the sea).

In Mythology, Pisces is often associated with Helen of Troy, from the legend of the Trojan War. Pisces is also associated with the Greco-Roman god Poseidon/Neptune and sometimes also the gods Zeus/Jupiter, Morpheus, and Thor and the goddess Tyche/Fortuna.

*Under the Tropical Zodiac, Pisces occupied by the Sun from February 20 to March 20. Under the Sidereal zodiac, it is currently from March 15 to April 13. and is associated with the constellation of the same name.