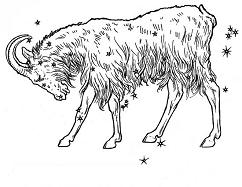 CAPRICORN the Goat - December 22 to January 20

The Capricorn individual is prudent, responsible, realistic, formal, patient, methodical, disciplined, traditional, cautious, conventional, hard-working, persevering, self-reliant, ambitious, businesslike, career-oriented, authoritative, conscientious, and competent. They can also sometimes be rigid, suspicious, status-seeking, demanding, insensitive, inhibited and saturnine.Capricorn is the cardinal,earth, feminine sign. Capricorn is symbolized by the Goat. The ruling planet of Capricorn is Saturn , the planet of restrictions and. The earth form of Capricorn is hard cold winter grounds or mountains. The keyphrase for Capricorn is: "I Use".

About The Capricorn Personality

If you were born with the Sun in Capricorn, you are are ambitious and steady. The Sun Sign of Capricorn is someone who has a purpose in life and strives to attain success, status, and authority. You are motivated when it comes to achieving what you desire. Your personality is geared toward leaderhship and power. You also have a heightened sense of the value of time. This makes you a wonderful organizer and planner.

Capricorns are very patient people, and don't mind waiting for success, which usually does come to them because they are responsible and dedicated to getting ahead. Capricorns are also very self disciplined people and most will achieve positions of authority and wealth through their own hard work and efforts. Even as a child Capricorn individuals are usually practical and determined.

Capricorn individuals also have a sense of gloom and sadness about them. You may worry too much about the details of life. You don't want to fail in your sincere efforts. You are a realist and sometimes don't take enough time for idle pleasure. You have a purpose and you have faith in yourself and in your ideas. Capricorns rarely rely on other people for anything unless they feel they absolutely have to. Sometimes people misinterpret you as being cold and remote. But it's only because you like to hold your own in life.

Beneath the reserves of the Capricorn personality is a sensitive and sympathetic individual. You are there when other people need you. Even though you appear gloomy at times you have a wonderful sense of humor about life. Your wit is somewhat dry but it can come out when other people least expect it. Capricorn Natives are very good when it comes to money because of their sensible, practical and responsible nature. Sometimes they can be a little too conservative and cautious where finances are concerned, but this can lead to much wealth later in life. 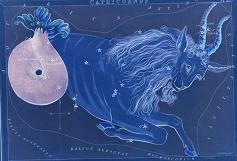 Capricorns like to always be prepared for the future. They will pay attention to the details. You tend to size up a situation and weight the pros and cons before plunging right in like other signs such as Aries. This can be beneficial in the end. Capricorns always do their research first. Once prepared Capricorn will set out to acheive the desired goal and they won't usually look back untill they get where they need to be.

Capricorn is concerned about their security in life, and this can sometimes lead to materialism. You also dislike when people get in the way or upset the plans you have made for yourself. You are a very proud person and sometimes find it difficult to forget and forgive anyone who has hurt you. But when someone helps you in any way you are very quick to return the favor, and in this sense you can be generous. This generousity comes from your need to not be obligated to anyone else. You rely only on you. When the going gets tough, Capricorn gets going.

Many Capricorns even marry for money and prestige. Material success equals security for them. In relationships, Capricorn can sometimes dominate because being in control helps to take away their feelings of insecurity and vulnerability. You have tendency to be suspicious and often feel the need to test the loyality of others. But you are also continually loyal to your loved ones. You want to be loved and appreciated, but may have a hard time letting anyone know that you feel this way. You conceal your true feelings, and sometimes just prefer to be a loner.

It's sometimes hard for a Capricorn to reveal their true selves. Others may see you as being aloof and indifferent. But at times your elusive nature can actually draw others too you out of curiousity. Anyone who discovers the wonderful part of you that you often keep hidden will be well rewarded. You can be very affectionate with a loved one and will strive to cherish and protect them.


Symbol and Glyph - The Symbolic representation for Capricorn is the Sea-Goat:

The Capricorn glyph symbol is -

It is a representation that derived from the image of the sea-goat; the tail.

Ruling Planet- In Astrology, Capricorn is ruled by the planet Saturn. Astrologically Capricorn is associated with the principles of limitation, restrictions, boundaries, practicality and reality, crystallizing and structures. Saturn governs ambition, career, authority and hierarchy, and conforming social structures. It concerns a person's sense of duty, discipline and responsibility, and their physical and emotional endurance during hardships.The influence of Mercury over Capricorn creates obstacles, limitation, restriction and discipline. In Roman mythology Saturn is the god of agriculture, founder of civilizations and of social order and conformity.

Anatomy - In Medical Astrology Capricorn represents the bones, joints, knees, skin, teeth. Many Cancer Natives and Cancer Ascendents have an almost moon-like apperance to their faces. They also have a tendency to gain weight in later years. Capricorn natives often have beautiful bone structure, but there is a tendency of problems related to stiff joints, rheumatism, and orthopedic problems.

Duality - Virgo is considered a Feminine sign. The other feminine signs of the zodiac are Taurus, Cancer, Scorpio, Capricorn, and Pisces.

Element/Triplicity - Capricorn is an Earth sign. Earth signs are practical, dedicated, and stable. The other 2 earth signs of the zodiac are Taurus and Virgo.

Color - Dark Green, Dark Gray and Brown (associated with colors of nature and of the earth).

In Mythology, Capricorn is allied with the Greek Myth of the nanny goat who provided Zeus with his milk as a babe. When she died, Zeus honoured her with a spot in the sky, when he placed her body. Capricorn is also associated with the Greco-Roman god Cronus/Saturn and sometimes the god Aristaeus. Capricorn is often depicted as having the lower half of a fish.

*Under the Tropical Zodiac, Sagittarius occupied by the Sun from December 22 to January 20. Under the Sidereal zodiac, it is currently from January 15 to February 12. and is associated with the constellation of the same name.