The Prophecies of Nostradamus 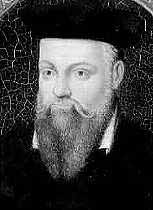 Nostradamus (December 14, 1503  July 2, 1566), Latinized name of Michel de Nostredame, was one of the world's most famous publishers of prophecies. He is best known for his book Les Propheties, the first edition of which appeared in 1555. The book consisted of one thousand quatrains, which constitute the largely undated prophecies for which he is most famous today. Feeling vulnerable to religious fanatics, however, he devised a method of obscuring his meaning by using "Virgilianized" syntax, word games and a mixture of languages such as Greek, Italian, Latin, and Provençal

Nostradamus enthusiasts have credited him with predicting numerous events in world history, from the Great Fire of London, by way of the rise of Napoleon and Adolf Hitler, to the September 11 attacks on the World Trade Center.

The prediction that actually made Nostradamus famous was his reference to a Franciscan monk as 'His Holiness', and who later became Pope Sixtus V. Here are some of the other predictions that followed this one.

Century 1, Quatrain 87
Earth-shaking fire from the center of the Earth. Will cause the towers around the New City to shake: Two great rocks for a long time will make war, And then Arethusa will color a new river red.

Century 2, Quatrain 89
One day the two great leaders will become friends, Their great power will be seen to increase: The new land will be at the height of its power, To the bloody one the number reported.

Century 4, Quatrain 16
The free city of Liberty made servile, Made an asylum for corrupt ones and dreamers: The King changed, to them not so vehement: From one hundred will become more than a thousand.

Century 5 Quatrain 65
Suddenly arrived, the terror will be great, The principal players in the affair are hidden away: And the lady in the hot coals will no longer be in sight, Thus little by little will the great ones will be angered.

Century 6, Quatrain 97
At five and forty degrees, the sky will burn, Fire approaches the great new city, Immediately a huge, scattered flame leaps up, When they want to have verification from the Normans.

Century 8, Quatrain 17
Those at ease will suddenly be cast down The world put into trouble by three brothers, The enemies will seize the marine city, Famine, fire, blood, plague, all evils doubled.

Century 8, Quatrain 59
Two times put high, two times put low, The East also the West will weaken: Its adversary after several battles, Driven out by sea will fail at the time of need.

Century 9, Quatrain 81
The sly King will understand his ambushes, From three fronts the enemies assail, A strange number, tears from the hooded men, The brilliance of the translator will come to fail.

Century 10, Quatrain 74
The year the great seventh number is accomplished, Appearing at the time of the games of slaughter: Not far from the age of the great millennium, When the dead will come out of their graves.

Century 10, Quatrain 97
Triremes full of captives of all ages, Times good to bad, the sweet for the bitter: Prey to the Barbarians hasty they will be too soon, Greedy to see the "plume" [feather or of smoke?] wail in the wind.

Did Nostradamus Predict The 9/11 Attack on the
World Trade Center in New York City?

"Volcanic fire from the center of the earth
will cause trembling around the new city:
Two great rocks will make war for a long time.
Then Arethusa will redden a new river.
In the year 1999, in the seventh month,
from the sky will come the great King of Terror,
bringing back to life the great King of the Mongols.
Before and after, Mars to reign by good fortune."

Century VI, Quatrain 97
At forty-five degrees, the sky will burn, Fire approaches the great new city, Immediately a huge, scattered flame leaps up When they want to have verification from the Norman

Century X , Quatrain 49
The king will want to enter the new city, Through its enemies they will come to subdue it Captives liberated to speak and act falsely, King to be outside, he will keep far from the enemy. Garden of the world near the new city, In the path of the hollow mountains, It will be seized and plunged into the Vat, Drinking by force the waters poisoned by sulfur.

Nostradamus Society of America
Here is a Interesting site that provides current and historical information about Nostradamus and his prophecies, presented by author Victor Baines (media consultant).

Nostradamus 101
This is a great website for anyone wanting to delve more deeply into the life and predictions of Nostradamus. The webmaster has gathered over 150 pages of research about his predictions from various sources.

Nostradamus and the 9/11 Attacks
After the terrible tradgedy of 911 an 'altered' version of one of Nostradamus' quatrains began circulating on the internet in regards to the World Trade Towers.

Armageddon
Armageddon ( also known as Mount of Megiddo), is the site of the final battle (or campaign) between God, and Satan ('adversary or Devil'). Satan will operate through the person known as the "Beast" or the Antichrist