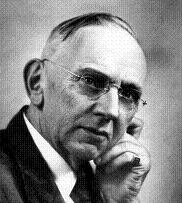 Edgar Cayce was born March 18, 1877 and his life is one of the most compelling in metaphysics. For more than forty years, the "Sleeping Prophet" as he is sometimes called, closed his eyes, entered into an altered state of consciousness, and spoke about subjects such as health, healing, dreams, prophecy, meditation, and reincarnation.and was well known for many things including his psychic abilities.

Cayce became an American celebrity towards the end of his life, and the publicity given to his prophecies has overshadowed what to him were usually considered the more important parts of his work, such as healing (the vast majority of his readings were given for people who were sick) and theology (Cayce being a lifelong, devout member of the Disciples of Christ). Cayce touched upon many subjects such as the Akashic Records, Reincarnation, Religious matters and more.

Today there are tens of thousands of Cayce students. Most are located in the United States and Canada, but Edgar Cayce Centers are now found in 25 other countries. The Association for Research and Enlightenment (ARE), headquartered in Virginia Beach, VA, is the major organization promoting interest in Cayce.

Cayce's methods involved lying down and entering into what appeared to be a trance or sleep state, usually at the request of a subject who was seeking help with health or other personal problems (subjects were not usually present). The subject's questions would then be given to Cayce, and Cayce would proceed with a reading. At first these readings dealt primarily with the physical health of the individual (physical readings); later readings on past lives, business advice, dream interpretation, and mental or spiritual health were also given. Edgar Cayce on Prophecy, 1968

Until September 1923, they were not systematically preserved. However, an October 10, 1922 Birmingham (Alabama) Age-Herald article quotes Cayce as saying that he had given 8,056 readings as of that date, and it is known that he gave approximately 13,000-14,000 readings after that date. Today, only about 14,000 are available at Cayce headquarters and on-line. Thus, it appears that there are about 7,000-8,000 missing Cayce readings.

When out of the trance he entered to perform a reading, Cayce claimed generally not to remember what he had said during the reading. The unconscious mind, according to Cayce, has access to information which the conscious mind does not  a common assumption about hypnosis in Cayce's time. After Gladys Davis became Cayce's secretary on September 10, 1923, all readings were preserved and his wife Gertrude Evans Cayce generally conducted (guided) the readings.

Cayce said that his trance statements should be taken into account only to the extent that they led to a better life for the recipient. Moreover, he invited his audience to test his suggestions rather than accept them on faith.

Other abilities that have been attributed to Cayce include astral projection, prophesying, mediumship (communication with the dead), viewing the Akashic Records or "Book of Life", and seeing auras. Cayce claimed to have become interested in learning more about these subjects after he was informed about the content of his readings, which he reported that he never actually heard himself.

Though Cayce considered himself a devout Christian and lived before the emergence of the New Age movement, some believe he is the founder of the movement and was influential on its teachings . Edgar Cayce died January 3, 1945 at the age of 67.

Edgar Cayce Biography Wikipedia.com full article on Edgar Cayce. Detailed information about his family, his early life, his work and his legacy..

Edgar Cayce's A.R.E The Association for Research and Enlightenment, Inc. is a not-for-profit organization, founded in 1931 by Edgar Cayce, to research and explore transpersonal subjects such as holistic health, ancient mysteries, personal spirituality, dreams and dream interpretation, intuition, and philosophy and reincarnation.

Edgar Cayce Prophecies Edgar Cayce was the most documented clairvoyant of the twentieth century. Seven major prophecies of his did came true, including the Stock Market Crash,The Shifting of the Earth's Poles, El Niño and the findings of the Dead Sea Scrolls to name a few.