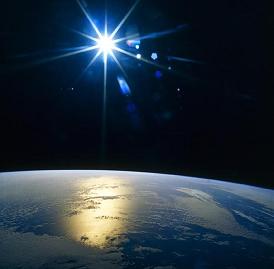 Ancient cultures of the past observed celestial phenomenon and tried to understand the world around them. and These past civilizations recorded this information, making clearreference to the cosmic cycles and events that played an important role within their society. From sacred scripture to complex calendar systems, past civilizations may have been trying to forewarn us about what was to be the fat of humanking and the planet Earth. Humanity may be currently approaching the end of a galactic cycle and soon to be shifting in a new age. This new age brings with it an evolution of consciousness, but will it also bring chaos and destruction? There is always a darkness before the dawn.

There are numererous prophecies and predictions surrounding the 2012 event; it has become a phenomenon that reminds many of us of the Y2K event because of the many fear-based conspiracies that surround it. But is there some truth behind the 2012 event?
Of the many prophecies that have been passed down throughout the ages, many describe these very times that we are currently in, and many of the current conditions and events on the planet seem to be fulfilling these prophecies.


Change is the only thing constant within the universe, and many people our observing the changes that are taking place upon the planet and within human consciousness itself. But is it really all leading up to the year 2012? What about this year do we need to be aware of and is there something we should do to prepare? Will a profound event occur suddenly on the actual date of December 21, 2012, or are the prophecies about a cycle that involves a process we are already experiencing on many levels?

This important time and cycle we are now in has been referred to by various names by various cultures, religions and groups. Names such as "The New Age of Aquarius", "The Time of Trial on Earth", "Judgement Day or Apocolypse" , "The Time of Great Purification", "The Quickening", "The Golden Age, "The End Days or End Times", "The Shift or the New Age", and so on. Many ancient peoples and native american cultures spoke of these last days of the Great Cycle, including the: Maya, Hopi, Egyptians, Kabbalists, Essenes, Qero elders of Peru, Navajo, Cherokee, Apache, Iroquois confederacy, Dogon Tribe, and Aborigines. From Nostradamus and Edgar Cayce, to the Bible book of Revelations and The Prophecy of the Popes. How does all of this connect and what does it mean?


Many people feel that the Earth is currently in a process of being regenerated; this will offer a type of 'spiritual awakening' to all who are open to it and invite these changes into their awareness. This experience is known as the Ascension process. The peak of this all will occur around the year 2012.

The following links will give you more insight and explanation into the great changes occuring now on the planet and within humanity itself. Explore through the ancient prophecies and predictions, get the science and facts about the galactic cycles and the cosmic shifts that are taking place at this time, and decide for yourself what the year 2012 will bring and what may be in store for humanity beyond this time.

The Maya/The Mayan Calendar Explained
The Maya (c. 250 CE to 900 CE) were a civilization with very advanced knowledge of mathematics, astronomy and architecture. The Mayan Long Calendar ends on December 21, 2012. The Maya speak of this period as being the end of one cycle of time moving into the next one. - The Mayan Long Calendrical systems explained.

Earth Changes and The Ascension
About the earth changes, the ascension and the fifth dimensional reality, planetary shifts and cycles, the dawning of the new age and the evolution of consciousness.

The Astrological Age of Aquarius
All about the astrological cycles and the dawning of the new age of aquarius and what it means for humanity.

All About 2012
About the Mayan Calandar end date, sun cycles and other astrological and cosmic events of 2012
that tell us how 2012 is the beginning of a new cycle, and not the end.

2012 The Ascension and Human Consiousness

2012: Ascension, Rebirth and the Dimensional Shift
1987 was a momentous year that marked the beginning of humanity?s ascension, rebirth and shift into the Fourth Dimension.

The date december 21, 2012 AD represent an extremely close conjuction of the Winter Solistice Sun with the crossing point with equator of the milky way (Galactic Equator) and the Ecliptic path of the sun. The Ancient Maya referred to this as the "Sacred Tree". This event has been coming to resonance very slowly over thousands of years and will come to resolution at exactly 11:11 AM GMT. Many esoteric sources interpret the completion of the thirteenth B'ak'tun cycle in the Long Count of the Maya calendar (which occurs on December 21 by the most widely held correlation) to mean there will be a major change in world order.

2012 Predictions
Links to prophecies and predictions relating to the year 2012, ... global catastrophes, changes of consciousness, predictions about science and economy, and more.

PoleReversals.com
According to some geologists and scientists, we are in the middle of a deadly 11,500 year cycle when the ice age comes back. The start of the cycle is marked with a Polar reversal, super volcanic activities, massive earthquakes, Tsunamis and nasty hurricanes.

The Living Prophecy
About the Mayan Calandar end date, sun cycles and other astrological and cosmic events of 2012.

More Links and Resources about 2012

December 21 2012
The world as we know it is in for some dramatic and devastating changes. Explore the possibilities, see what other believe.

Network 2012
An international communications hub for linking up Light Workers around the world.

Events of 2012
A list of things that are scheduled to take place in the year 2012. From entertainment to politics.