Earth Changes and The Ascension

The Mayan Calendar and Cycles Explained

The Astrological Age of Aquarius

Earth Changes and The Ascension

The Mayan Calendar and Cycles Explained

The Astrological Age of Aquarius 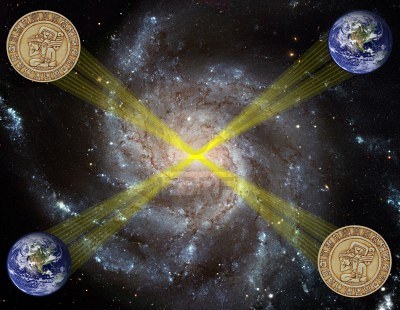 According to many, the year 2012 will see the fulfillment of a concatenation of events, some of them good while others are undoubtedly bad. The worst of these is the prediction that the world as we know it will end on the date of the mid-winter solstice, on December 21, 2012. However, despite these dire predictions, the reality is that the coming year is likely to be little changed from 2011, and the warnings of these so-called "prophets" are equally likely to be false.

This is not to say that 2012 will be free from troubles. There will certainly be continuing strife, particularly among Islamic nations, as more and more people resist their autocratic masters. And just as in the present year the world will experience yet more natural disasters. There will be more tornados and hurricanes. There will be more earthquakes, firestorms, floods, droughts and the like. But the end is not yet. For as Jesus explained to his disciples:

"And ye shall hear of wars and rumours of wars: see that ye be not troubled: for all of these things must come to pass, but the end is not yet. For nation shall rise against nation, and kingdom against kingdom: and there shall be famines, and pestilences, and earthquakes, in divers places. All these are the beginning of sorrows."(Matthew 24:6-8)

So how then did the year 2012 come to be such a climactic date in prophecy? Most people today are aware that this date has something to do with the Maya, although very few have taken the trouble to investigate whether there is any truth to it all. For many people it is far easier to simply swallow the wild predictions that now abound. And all of this will no doubt grow as the new year approaches.

The Mayan civilization had its origin some 2,000 years before the birth of Christ. Over the years the Maya developed an advanced culture that spread over much of Meso-America, incorporating the modern countries of Guatamala, Belize, Honduras and El Salvador, as well as the Yucatan peninsula and the highlands of Mexico. Modern scholars consider that the Mayan cities reached their highest state of development during the "classic" period, from the years 250 to 900 AD.

What distinguished the Maya from other pre-Columbian societies was that they had a sophisticated system of writing, as well as a unique system for measuring time. Just like the modern calendar we use today in the West, they had a system which recorded the length of the year, as well as a linear system which measured longer periods of time. For this reason the linear system has come to be called the "Long Count" calendar.

The Long Count calendar of the Maya was open-ended. That meant that, while they measured time by means of an ever increasing system of chronological units, there was no "end date" to the calendar itself. So just as we can set a date for a time far in advance of our own time (eg 2610 AD), so too could the Maya. But what was significant about their Long Count calendar was that it began on a specific date. That date was August 11, 3114 BC. 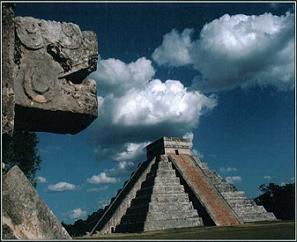 Although much of Mayan writing was destroyed by the Spanish conquistadors, what little remains can be found in libraries in such places as Dresden, Paris and Madrid. From these writings modern scholars have learned that the Maya had a strong tradition of "world ages". They were not alone in this as similar references to successive world ages can be found in the ancient literature of China and India.

According to the Popul-Vuh, a Mayan classic that included their creation myths, four "worlds" had already been created by their Gods. These previous worlds had long since passed into history, and had been replaced by the fifth world, the age in which we are now living. The Long Count calendar began on the date when the fourth world ended (3114 BC). And this is where the association with the year 2012 begins.

The Maya believed that the fourth age, or world, lasted for exactly thirteen B'ak'tuns. This represented a period of about 5,125 years. Although there is nothing in the written Mayan record to support this, some Western writers (such as Graham Hancock and Michael Coe of Yale University) have suggested that this fifth world would endure for the exact span of time as the fourth world. This would mean that our current world age would endexactly thirteen B'ak'tuns after it began.

According to the Long Count calendar, this date would be December 21, 2012. And all of this would have made perfect sense except that it made no sense at all to the Maya who are alive today. The reason for this is that the present-day Maya do not use the Long Count calendar. In fact many have never even heard of it, because it was used exclusively during the "classic" period up to the year 900 AD, and is not in current usage today.

Mayan scholars have also rejected Coe's ideas, as well as others who have picked up on his theories. Susan Milbrath, curator of Latin American Art and Archeology at the Florida Museum of Natural History, has pointed out that we have no record or knowledge that the Maya predicted that the world would come to an end in 2012. Her words have been echoed by the Maya themselves.

Both the Mayan elder Apolinario Chile Pixtun and Mexican archaeologist Guillermo Bernal have indicated that the word "apocalypse" is a Western concept based on Biblical teaching. As such it has little or nothing to do with Mayan beliefs. Bernal also believes that such ideas as "the end of the world" have been foisted on the Maya by Westerners who have their own agendas.

And Mayan archaeologist Jose Huchm has stated: "If I went to some Mayan-speaking communities and asked people what is going to happen in 2012, they wouldn't have any idea. That the world is going to end? They wouldn't believe you. We have real concerns these days, like rain".

The "Long Count" calendar of the Maya was constructed according to an escalating number of chronological units. So, for example, a single day was referred to as one K'in, and 20 days as one Winal. Carrying on from there, 360 days made up one Tun, 7,200 days one K'atun, and 144,000 days one B'aktun. But the Long Count calendar was not designed to end at that point. It made provision for yet higher multiples of time, such as the Piktun, Kalabtun, K'inchiltun and the Alautun.

As we have seen, the Maya believed that their Gods had created four previous ages, or worlds, and that we are currently living in the fifth world. According to Mayan creation tradition, their fourth age ended after a period of exactly thirteen B'aktuns (about 5,125 years). The new (fifth) age began, according to the Long Count calendar, on August 11, 3114 BC.

Now it just so happens that the anniversary of the end of the fourth Maya age falls on December 21, 2012. This represents a span of time exactly thirteen B'aktuns after the beginning of the fifth age. And this is where the sad saga of 2012 begins, for various Western writers have seized upon this date as conveniently fitting in with their various "end of the world" scenarios. Yet they have forgotten one thing.

They have forgotten that there is no record that the Maya believed that their fifth world would end after precisely thirteen B'aktuns. As was pointed out in the previous instalment, the Maya of today attach no special meaning to the end of the thirteenth B'aktun, especially since the Long Count calendar has ceased to be in common usage for some eleven hundred years. So December 21, 2012 would be followed by December 22, 2012, with no special fanfare or significance.

The classic Maya (of around 900 AD) expected that the end of the thirteenth B'aktun would be followed by the beginning of the fourteenth B'aktun, and that the new B'aktun would follow in sequence just as the previous B'aktun had followed the one before. We know this because Mayan stelae (stone carvings) such as those found on the west panel at the Temple of Inscriptions in Palenque have been found with calendar dates far in excess of the 2012 ending of the thirteenth B'aktun.

But although the Maya themselves attached no special prophetic meaning to the year 2012, that has not stopped a host of other proselytes from linking it with a rash of predictions of their own. 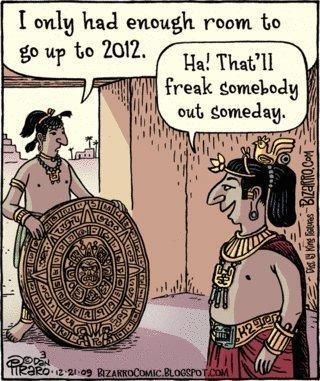